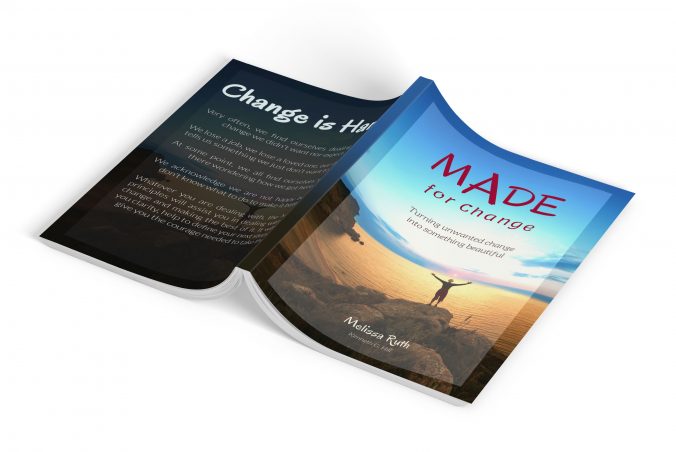 3d mockup of MADE for Change

Some time ago, a friend asked me to prepare a speech on adapting to change we didn’t want.

I had intended on presenting that speech at a TEDx style talk but that didn’t happen.

However, the response to my speech was unanimous – every single person who heard it exclaimed how much it helped them in THEIR moment and they did not even know they needed it.

This book, MADE for change, came from that speech.

Every single one of us is presented at some time with change we didn’t want.

We lose a job, we are transferred to a city we don’t like, we lose a spouse or a friend or a colleague, we are told our health is not the way we want it.

So many of these things can keep us down if we let it.  We might blame ourselves or others while sitting in the dark, waiting for the change we didn’t want to go away.

You may have heard it said, “When life gives us lemons, we need to learn to make lemonade.”  However, I want to encourage you that that lemonade does not have to be sour.  MADE for change will help you find the sweetener you need to make that lemonade not too sour and not too sweet.

Tonight, my first printed copies came in.  I recorded a video to share this moment with you:

OR – for a limited time – you can purchase your very own autographed copy direct from me!

Go to this page to order: https://melissaruth.net/buy-autographed-copies/

Ode to my Viking

November 22, 2017 / melissa / 0 Comments
Many who are reading this don’t know me personally. Based on what you’ve read via social media, you may be tempted to think I’m this great woman who has persevered through many trials.
What you don’t know is what happens behind the scenes. You see, although I wish it weren’t so,  I am not all that amazing.  My family will testify to that fact. I tell more than I should, I spend too much time talking and not enough time listening and the list goes on and on and on.
Contrary to popular opinion, no one is perfect.that said, in the heat of attraction, one wants to believe the person they are with is perfect.
When I met my Viking, a little over 20 years ago, I was a mess. I wanted to believe I was a princess deserving of a prince but had accepted the fact that I was more like a fallen princess who deserves nothing.
I found peace and forgiveness in my Savior, the Lord Jesus Christ and had accepted that I was more than I felt I was and made the choice to trust God more than my own feelings or emotions.
Around this time, a man came into my life who saw the raw but healing holes within me and wanted to join me in the battles of life that we both knew were ahead of me.
He didn’t have to but he was the model of Christ to me.  He saw me as a forgiven woman, cleansed of all wrong doing, a woman who was imperfect but that he wanted to love and walk with thru the rest of our lives on this Earth.
We’ve gone through a lot since those days. 21 years later, I’m just as messed up…if not more and he still stands by me.
Sure, he would admit he isn’t perfect but he is kind and loving and forgiving even though I generally don’t deserve it. He chooses love and honor when he could rightfully choose anger and resentment.
Why am I sharing this with you?
Because I want you to know that true love isn’t all about the feelings you feel when you are with that person, or the belief that you are complete when with that person. True love is deciding to stay with that person even when they hurt you. It’s going into battle with them because you committed to be their partner for life.  It’s acknowledging everyone is human and allowed mistakes. It’s about forgiving and being willing to pick up that sword and shield for them no matter what.
I don’t deserve it but I’m ever so thankful this Thanksgiving for him and his choice to love me.

Recently, I had the opportunity to share more about Choose Your Viking and the concepts in it via a few media sources.  I am beyond honored to be asked to join these amazing media outlets to share about my book and future plans.

If you have visited here due to hearing me on one of those media sources, welcome!

If you are just now hearing about these interviews, feel free to listen to them by going to the following link: